Each of the Earth’s minerals has a crystalline form. Diamonds are crystalline carbon; emeralds are crystalline beryllium; and rubies are crystalline corundum. The difference between corundum and a ruby is the way the molecules are organised or structured. Each crystal has a specific structural pattern. Minerals form crystals when circumstances (for example: heat and/or pressure) cause the molecules to form a repeating pattern. Most people know that extreme pressure is required to form a diamond. Pressure forces molecules to arrange themselves in a different configuration to withstand the pressure. Structural organization changes the characteristics of the substance. Some of these changes are obvious—like the visible difference between carbon and a diamond. It’s all a matter of organization.

Dr. Gerald Pollack, professor of bioengineering at the University of Washington has provided significant evidence for water’s liquid crystalline structure. His research has demonstrated water’s capacity to form large zones of structured water. He has shown that this water has measurably different characteristics including: molecular stability, a negative electrical charge, greater viscosity, molecular alignment, and an enhanced ability to absorb certain spectra of light. He and others have provided evidence that the liquid crystalline phase of water is intimately connected with the generation of life. Dr. Pollack discusses his research in a recent lecture.

Much of the water in a healthy human body is in a liquid crystalline/structured state. Many components of the body are also considered to be liquid crystals, including collagen and cell membranes. These tissues work cooperatively with structured water to create an informational network that reaches to every cell. The liquid crystalline organization of the human body accounts for the instantaneous transfer of signals and other biological information.

Water’s crystalline structure is based on tetrahedral geometry where oxygen atoms form the center of each tetrahedron. Under ideal circumstances, as water tetrahedra join together, a repeating hexagonal pattern is generated with oxygen atoms forming the vertices of each hexagon. This is the reason liquid crystalline water has also been referred to as hexagonal water.

Top row (above) The tetrahedral molecular structure of water as viewed from the side.

Quartz crystals exhibit the same molecular geometry as structured water. Quartz is a network of interconnected SiO4 tetrahedra. Structured water is a network of OH4 tetrahedra. This is one reason water has the capacity to store and transfer information. The image to the right shows the geometric pattern in quartz. It identifies the tetrahedral arrangement as well as the hexagonal channels created by the repeating geometry. 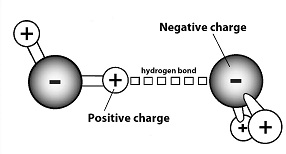 The Hydrogen Bond
The positively-charged hydrogen atom is electrostatically attracted to the negatively-charged oxygen atom to form a hydrogen bond. This is the foundation for the development of the liquid crystalline water matrix.

Hydrogen bonding in most water is random. There is no long-term pattern to the way the water molecules become interconnected. However, many natural forces can influence the degree and the stability of hydrogen bonding. The electromagnetic forces inherent in the Earth play a role. Organization itself provides a degree of stability, similar to the way interlocking bricks create a sturdy framework, so that hydrogen bonds are not as easily broken. A structured water network is said to be coherent when it can maintain a degree of molecular stability while in motion.

Water can form many structural patterns depending on its vibrational environment. When there is a high degree of hydrogen bonding (no matter the pattern) then water behaves differently and takes on different characteristics. Water’s capacity to store and to transmit information is directly proportional to structure and coherence. The greater the structure (characterized by increased hydrogen bonding), and the greater the coherence (characterized by the degree to which the water can maintain its structure), the greater its capacity to store and deliver signals and other information.

Liquid crystalline/structured water is living water—and it is only the beginning.